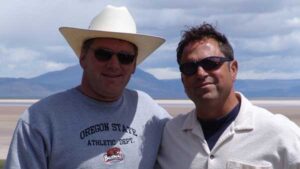 Ric DeMarco and Dave Hodgert began microdistilling Desert Juniper Gin in 1997. Like the art of gin making, their friendship is steeped in history and tradition. Desert Spirits is as much about meaningful connection as it is about finely crafted, microdistilled spirits.

Ric and Dave first met at a youth outreach meeting more than 30 years ago. Dave was a teen with a complicated life, transplanted from South Lake Tahoe, California to Bend, Oregon. Ric was 10 years older, and the outreach group leader. Their lives have been intertwined ever since. It’s a wide and deep history. They’ve golfed, fished, traveled, built houses and run businesses together, but it is more than just business and play; they’ve been by each other’s sides through life’s most important moments, and it is a relationship that extends to their families. Dave is like an uncle to Ric’s kids. Ric was in Dave’s wedding. Dave’s daughter was a flower girl in Ric’s son’s wedding. Ric is godfather to two of Dave’s children. Dave became a part of Ric’s family, Bringing him along with hs brothers and friends on annual guys trips to the Alvord Desert and hunting in the Desolation Unit of Oregon with Ric’s boys. Dave related the trips to the Alvord Desert as a great excuse to “play poker, blow things up, eat incredible meals, drink the finest spirits and hang out in the hot springs,” though their conversations also revolved around deeper aspects of their lives. Today, Ric and Dave live in different towns, but they still get together and laugh a lot; Ric says, “We’re very sincere but not very serious!”

Over the years, they established different career paths, Dave in telecommunications and Ric in custom homebuilding. Along the way, they have pursued various creative businesses together (two of the more unusual: hand painted neckties and a golf art company). Not all friendships can stand up to the challenges of entrepreneurship, but for Dave and Ric, it works. Ric explained, “We bring different but complementary skills to the table, and we understand each other.” As one might guess, their world-views are similar; they believe in serving their communities and helping others. Both Ric and Dave actively work with youth and adults in schools, sports, and civic organizations.

Desert Juniper Gin’s genesis came through their experience with a cigar business they had started in 1995. The story begins with Ric’s frustration. Ric wished he could get a great cigar on the golf course, the ideal situation to enjoy a cigar with pals, but at the time, cigars were not available in most social settings. He and Dave worked with their wives, Debbie and Lori, to develop a concept that would make cigars available for everyday celebrations, rather than rare luxuries. They founded an international company providing cigars to golf courses, nightclubs, restaurants, and casinos. They also developed 9 different cigar brands. They were at the forefront of the cigar craze. The message behind the business was enjoyment with compadres; as Dave put it, “The best thing about a cigar is the conversation and who you’re smoking it with.”

Keen intuition and strong business skills yielded quick results; their business exploded as the cigar culture gained popularity in the late 1990s. Within 18 months the company had grown from concept to nearly 6,000 locations across the U.S, and from 4 to 45 employees.

With exponential growth, the cigar company became more about management than fun. They sold the company, and began seeking a new creative venture. The idea of microdistilling was in-line with their focus on fine, handcrafted products. Based on their experience in the cigar industry, Ric and Dave sensed the oncoming renaissance of classic cocktails, and gin in particular. Ric shared this irony: “Frankly, I hated gin.” Until he co-created Desert Juniper Gin, that is!

Dave and Ric researched the long history of Jenever and London Dry gins. Their idea was to make a hand-crafted American gin, honoring the traditions of this spirit while using ingredients harvested locally around their home town of Bend. They began with wild Western Juniper berries, hand-picked in Christmas Valley. They experimented with a selection of local botanicals, soliciting friends for lively taste-tests while perfecting their recipe. Good water is a crucial ingredient, and another gift of the Bend environment, where clean mountain water travels through lava fields in the landscape. Dave and Ric took nature’s lead in their process, and found that filtering the distilled gin through crushed lava yielded the peak result.

Ric and Dave’s careful, handcrafted process and critical selection of local ingredients resulted in what Bon Appétit calls “the perfect martini gin.” The inherent qualities of Western Juniper from the high desert give Desert Juniper Gin a pure, natural flavor, rather than the chemical flavor and smell that many people associate with gin. Desert Juniper Gin’s distinctive golden hue comes from the berries, and production that doesn’t strip the color from the gin. Freshly poured, the gin yields a fragrant bouquet, with the smooth taste of juniper delicately blooming on the palette, and a clean finish. It is like drinking the scent of the high desert after a heavy June rain.

Desert Juniper is about good people sharing good times. More than three decades of authentic friendship, more than a decade of authentic Hand-Crafted American Gin. Ric and Dave hope you enjoy the results!